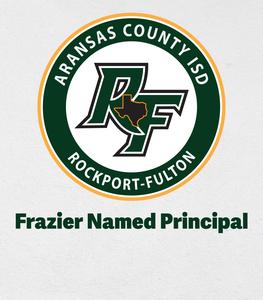 On Thursday, December 16, ACISD Board of Trustees named Adena Frazier Principal for Fulton Learning Center. Frazier had been the interim Principal at FLC since September. Mrs. Frazier, is in her 22nd year of service in public school educations. She served as a K-8 teacher for 13 years, over four years as a Math Specialist for Education Service Center 6 and for ESC 2, and over three years as an assistant principal and most recently served as an assistant principal at Rockport-Fulton High School.

Mrs. Frazier attended undergraduate school at the University of Louisiana at Monroe (1990), Lamar University (1998) followed by Stephen F. Austin University where she earned her Masters of Mathematics Education (2006) and Principal Certification (2016).

Please help us congratulate Mrs. Frazier on her new position.